My book is done! Click the link below to order it today!

“Faced with developmental challenges of a brain injury at birth and the devastating effects of bullying, this heart-warming story of faith explains how faith in God, believing in yourself, and leaning on others can rescue you from the edge of death and bring the ultimate victory…” 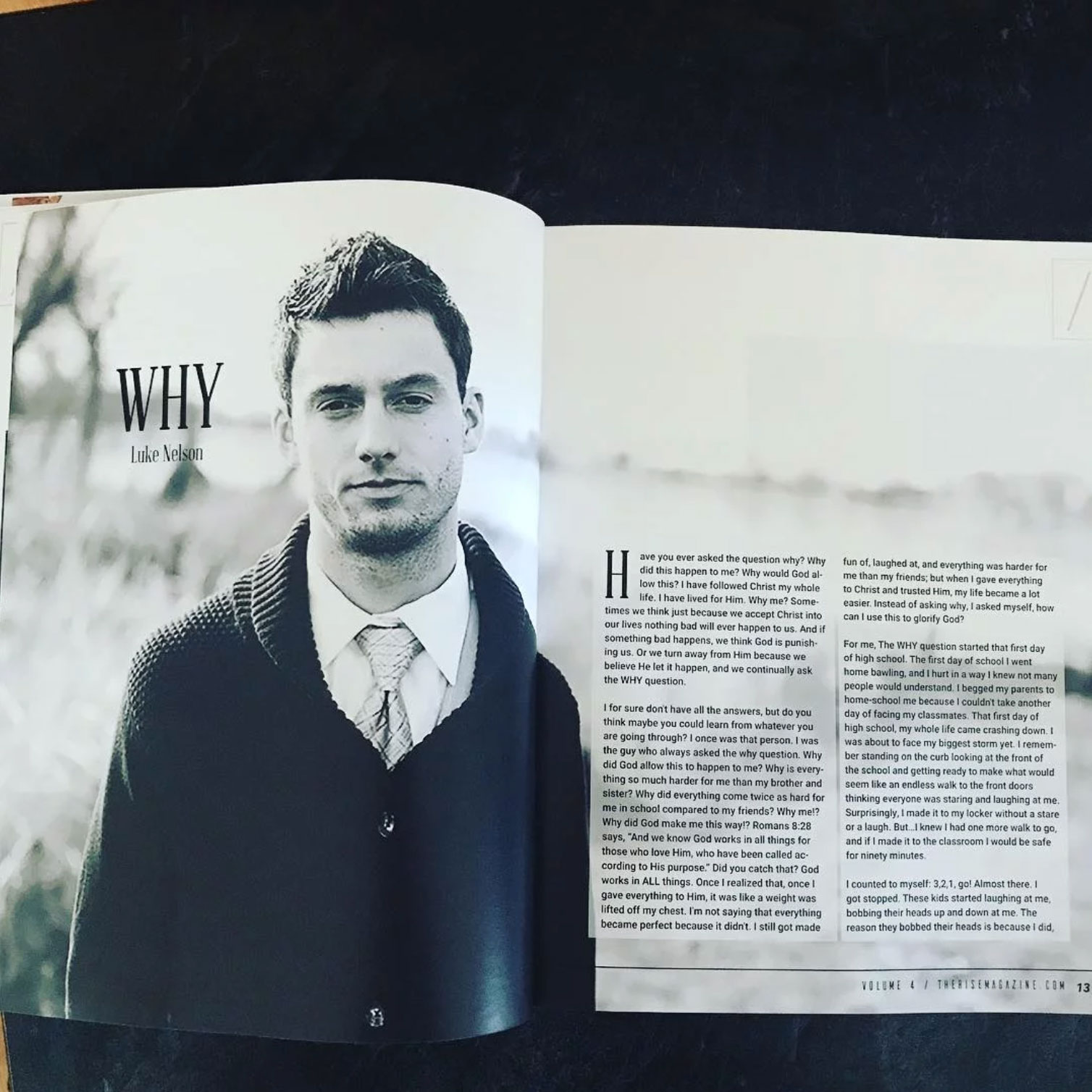 Luke’s challenges began even before he was born. He suffered a stroke while still in his mother’s uterus. As a result a significant part of his brain didn’t develop. Nurses in the hospital called him “the miracle baby” because a miscarriage was often the outcome of this kind of trauma.

The doctors told Luke’s parents that in all likelihood he would never be like other kids. However, his parent’s faith, Luke’s determination and positive attitude brought about a much different outcome. Through Luke’s hard work, perseverance and the help of others he excelled beyond natural expectations.

Luke’s freshman year in high school brought a whole new challenge, bullying. The pain of the bullying caused him to consider taking his own life. This was a pain like he had never experienced before. However his faith, the values instilled in him as a child, an attitude of never giving up and an advocate who stood up for him when he was unable to stand up for himself got him through this difficult time.

The physical and emotional struggles Luke faced and overcame growing up have not only made him the man he is today but have also given him an empathy for youth going through many of the same type of issues today.

It is Luke’s passion to share his story to as many youth as possible. It is a story of faith, a story of overcoming and ultimately a story of victory! Luke believes his story will encourage others as they face their own challenges and to be the one who “stands up” for others when they are unable to stand up for themselves. An important part of Luke’s message is that it only takes one individual to save a life and that individual could be you!

Stop Bullying Before It Starts

“From a suicidal adolescent facing depression, anxiety and bullying to speaking to millions as an author & empowerment speaker.”

When You Invite Luke To Speak:

“Luke is a winsome young man who tells his story of being bullied in an engaging, yet light-hearted manner. While bullying is a serious problem that emotionally scars children and youth, Luke does not shy away from mentioning the difficulties he faced, he is upbeat and does not play upon the emotions of his listeners. Rather he encourages those being bullied to find hope in God’s love for them, as well as challenges those witnessing bullying to take a stand against those who bully.

It is my pleasure to give a strong recommendation on behalf of Luke Nelson!”

“I would like to recommend Luke Nelson to you as a powerful motivational speaker on how to overcome disabilities and bullying. Luke and I have done several school assemblies on mental and emotional health. I was very impressed with his story of how through faith and the intervention of a school mate, he was able to overcome bullying over his disability.

Luke’s story will resonate with victims of bullying, disabled students and those who want to intervene and stop this abuse. Luke Nelson can make a significant contribution to the culture of any school.”

“We are all a gift and a unique creation of our God.

We were very blessed to have Luke join us at the SD Presbyterian Youth Rally and give his message. Luke is an amazing person and shows us how with God’s goodness and grace, the world will be a better place just by the sharing of love and kindness to everyone. We are all a gift and a unique creation of our God. Luke assured us that it is ok to stand up to the bully and stand up for the people being bullied and show them that God loves us just the way we are.”

“I recommend Luke to anyone looking for a powerful, inspirational message.

It is with great pleasure that I write this recommendation for Inspirational Speaker; Luke Nelson. Tracy Area High School was fortunate to have Luke present his anti-bullying message to our 7th – 12th graders this year. Luke was very professional and easy to work with. Luke came prepared and the set up was very smooth. Luke began the presentation with a lot of enthusiasm and the students were immediately engaged. He is so passionate about anti-bullying that it attracted each and every student to what he had to say. Luke also has a gift of sharing in a way that students can relate to and understand. He had great stories and a heartfelt testimony that tugged at their heartstrings. Luke found a way to connect with the students. Several students came down after the presentation to talk to Luke. He was so caring and took the time to visit with each one of them, something they will not forget. I recommend Luke to anyone looking for a powerful, inspirational message. He will not disappoint!”

A: A typical presentation lasts 40 minutes, followed by a 15 minute meet and greet time where Luke can further connect with the students.

A: We work hard to make Luke available and affordable. Fill out a contact request in our booking section for more information.